Impact of Olympics on recovery efforts 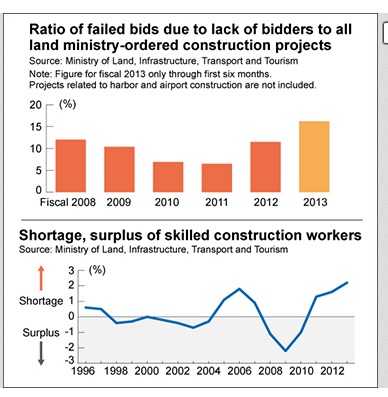 About 60 percent of leaders of municipalities heavily damaged by the Great East Japan Earthquake and tsunami fear that preparations for the 2020 Tokyo Olympics will hamper post-disaster reconstruction efforts, an Asahi Shimbun survey showed.

The latest survey revealed widespread concern among local municipalities that the Games may lead to shortages of workers and construction materials and slow reconstruction work in affected regions, a negative impact already being seen in some areas.

“We are fearing we will have fewer technical experts to manage reconstruction projects,” said Norio Kato, mayor of Shinchi, Fukushima Prefecture.

In winning the bid, Tokyo leaders had stressed that hosting the world’s largest sporting event will encourage recovery efforts in quake-hit areas.

The Asahi Shimbun sent out questionnaires to 42 local government heads in Iwate, Miyagi and Fukushima prefectures, all in the disaster-stricken Tohoku region, to see if they shared this view. All the surveyed municipalities are located in the prefectures’ coastal areas struck by the tsunami or are home to evacuation zones in Fukushima Prefecture designated after the March 2011 earthquake and tsunami triggered an accident at the Fukushima No. 1 nuclear power plant.

Twenty-three municipal leaders--the largest number--said the Tokyo Olympics will exert a relatively negative impact, while two said the event will have an extremely negative effect on recovery work.

The respondents were also asked to choose reasons for their views from among options. Multiple answers were allowed.

All the 25 leaders said the Olympics “will further exacerbate the shortages of materials and labor.”

Meanwhile, only two leaders said the Games will offer a big boost for disaster recovery, while 11 said it will have a relatively favorable impact. But the 13 leaders who have a positive outlook account for little more than 30 percent of the respondents.

“The number of visitors will rise,” said Takeo Ohashi, mayor of Matsushima, Miyagi Prefecture, who believes the Olympics will have a relatively positive impact.

Shiro Izawa, mayor of Futaba, Fukushima Prefecture, who gave the same response as Ohashi, said, “I expect the central government to place more priority on recovery of nuclear disaster-affected areas ahead of the opening of the Games.”

SHORTAGES IN LABOR AND CONSTRUCTION MATERIALS

As general contractors enjoy increasing demand in Tokyo to prepare the capital for hosting the Games, disaster-affected areas are facing severe shortages of labor and building materials, as local officials feared in the survey.

“The two employees (who have been working with you to advance decontamination work around the Fukushima plant) will have to return (to Tokyo) because there is special work for them relevant to the Olympics,” an official of a major general contractor told the cooperative association of building firms in Minami-Soma, Fukushima Prefecture, in December.

Although a company public relations official said, “it is just part of regular personnel relocation, and will not result in a decline in the total number of our employees in disaster-hit areas,” a senior official of the association said the latest personnel transfer has hurt the morale of local workers.

Far away from quake-affected regions, in Tokyo, construction of facilities to be used in the 2020 Games, estimated at a cost of nearly 500 billion yen ($4.93 billion), has started.

The construction of the Musashino no Mori Sogo Sports Shisetsu (Musashino forest comprehensive facility for sports), the planned site for the modern pentathlon, began in February. Installation work of the new national athletic stadium as well as six other facilities, including the Ariake Arena, to be used for the volleyball competition, is scheduled to start in fiscal 2015 and fiscal 2016, respectively, as well.

To respond to the increased demand for public works projects related to the Olympics, major contractors have been taking various personnel measures.

Shimizu Corp. has set up a task force headed by its vice president.

“We estimate that we will be able to win Olympic-related contracts totaling 120 billion yen in the coming five years,” said a company business planning official. “The peak of our receiving orders will come in fiscal 2016.”

Takenaka Corp. also established a special team for the Olympics, while Taisei Corp. has appointed a special sales representative to enhance its sales promotions.

In contrast, Aizu-Wakamatsu in Fukushima Prefecture has faced a chronic shortage of contractors. The prefectural government plans to provide housing for 2,000 nuclear disaster evacuees from Okuma, who currently live in the city. But it was not until late February that a company was selected to construct the housing.

Fukushima Prefecture in December received estimates from eight firms, but all exceeded the predetermined maximum bid set by the local government. In January, the prefecture raised the maximum, but bidding again failed.

The main factor behind the failed bidding was hikes in prices of raw materials and labor. The market price of fresh concrete in local areas, for example, has risen to 12,000 yen per cubic meter. The official standard value for the material, on which the maximum price for the project was based, was lifted by 1,700 yen in February, but the revised figure is equivalent to only 10,000 yen per cubic meter.

“Predetermined prices fail to keep up with surges in market prices,” said a local source involved in the construction industry. “As the Tokyo Olympics approaches, the difference may widen further.”

The evacuee housing building contract was finally awarded at a bid 6 percent higher than the predetermined price set by the prefecture. The houses are currently scheduled to be completed in March next year, two months later than planned.

Amid a succession of such failed bidding, currently being seen across Japan, the land ministry is taking action to address the issue.

“The cause (of the failed bids) is the predetermined price,” said land minister Akihiro Ota.

As part of such efforts, the ministry has raised the standard workers’ wages in Iwate, Miyagi and Fukushima prefectures, by 30 percent on average compared with fiscal 2012.

But there remain many problems to solve.

It takes time to train skilled workers, and fresh concrete produced at temporary facilities costs too much. Although the construction industry welcomes the increasing work, general contractors may maintain a cautious stance toward investing in expanding employment and adding new facilities, because the demand will likely plummet following the Olympics.

“It is difficult for the industry that has shrunk (due to long-continuing deflation) to keep up with the rapidly expanding demand,” a senior construction firm official explained. “The Olympics will inevitably exert a negative impact on reconstruction work.”

(Yoshinobu Motegi contributed to this article.) 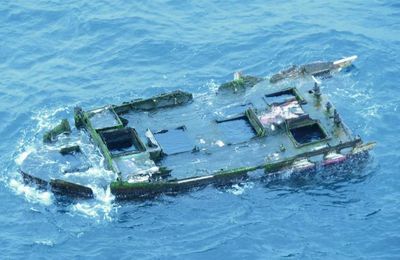