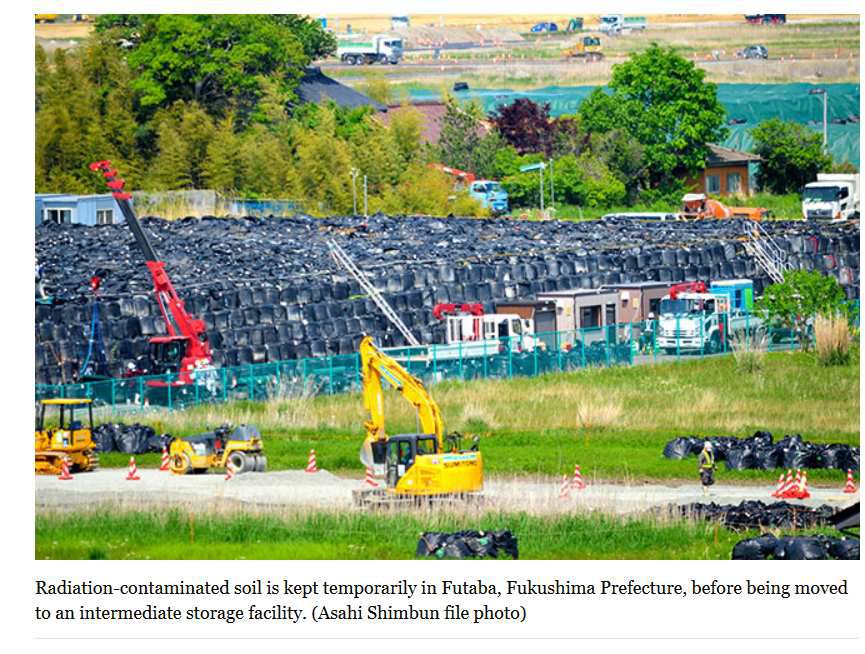 How to dispose of mountains of soil contaminated by radiation from the 2011 Fukushima nuclear disaster poses a massive headache for the central government.

Officials had long insisted that contaminated surface soil removed after the triple meltdown at the Fukushima No. 1 nuclear power plant would eventually be stored outside of Fukushima Prefecture.

According to one estimate, the total volume of such soil will reach 14 million cubic meters by fiscal 2021. Local entities outside of Fukushima are understandably hesitant about serving as host to such vast quantities of possibly hazardous dirt.

Officials in Tokyo are now hoping to sway local governments to act as hosts by proposing reuse of the contaminated soil for public works projects under certain conditions.

One requirement would be that soil radiation levels below 8,000 becquerels per kilogram, the standard used by the government in classifying whether the waste material requires special treatment, could be used for various construction projects.

This poses a dilemma for Fukushima Prefecture, which fears local residents will be stuck with the problem despite repeated pledges by the government to move all contaminated soil from the prefecture.

Work got under way four years ago to move contaminated soil to intermediate storage facilities in Fukushima Prefecture. As of Feb. 19, the volume of soil transported to those facilities totaled 2.35 million cubic meters.

Initially, the government set a target date of March 2045 for moving all of the contaminated soil outside of Fukushima to a permanent storage facility.

However, discussions have yet to begin on where to build the structure.

Koji Yamada, an Environment Ministry official who has been involved in the issue, conceded it will not be easy to find a candidate municipality for the facility.

"We are now at the stage of trying to obtain understanding from a national perspective," he said.

Ministry officials say that reusing contaminated soil to reduce the volume that eventually will have to be moved to the final storage facility could win favor from some municipalities.

A panel of experts set up by the Environment Ministry agreed in June 2016 that moving the entire volume of contaminated soil to a final storage facility is unrealistic.

The panel suggested that reducing the volume of contaminated soil by reusing portions deemed safe under radiation standards now in place seemed to offer the best option in finding a candidate site for the final storage facility.

It also proposed ways in which the soil could be reused; for example, in public works projects where the commissioning authority was clearly a responsible body.

The panel also proposed using the soil for the foundations of roads and embankments. It said sufficient quantities were available to ensure stable maintenance over many years.

When the panel met again last December, the members were briefed on the best-case scenario for the development of technology to reduce radiation levels in the soil. The most optimistic forecast was that as much as 99 percent of the debris could eventually be reused.

Under that scenario, only 30,000 cubic meters, or about 0.2 percent of the total volume, would have to be moved to the final storage facility to be buried there.

While Environment Ministry officials say that reusable treated soil would be considered for locations both within and outside Fukushima Prefecture, the only specific proposals made to date have been limited to three municipalities in Fukushima.

Local residents in two of those municipalities, one of which is Nihonmatsu, have mounted petition drives and other activities to block the reuse of contaminated soil in their areas. They contend that allowing such plans to go ahead would be at odds with government promises to store the soil outside of the prefecture.

The fact remains that the bulk of the contaminated soil is stored in Fukushima Prefecture. However, seven other prefectures also have a combined 330,000 cubic meters stored at various locations, such as parks and farmland.

Since August 2018, the Environment Ministry has been trying to determine whether using contaminated soil for land reclamation projects would prove detrimental to the health of local residents.

It has conducted field trials in Nasu, Tochigi Prefecture, and on the grounds of a facility operated by the Japan Atomic Energy Agency in Tokai, Ibaraki Prefecture.

But Nasu resident Masato Tashiro, who has been following the issue, was highly critical of the six-month period authorized to confirm the safety of such soil.

"That is way too short to make such a judgment, considering the fact the soil will be buried for such a long time," Tashiro said. "Residents fear their health may be impaired over the long-term."

(This article was written by Teru Okumura and Shintaro Egawa.)

I have the RIGHT to speak out!

Tokai 2 should be scrapped