The latest robot attempting to find the 600 tons of nuclear fuel and debris that melted down six years ago in the wrecked Fukushima No. 1 nuclear power plant met its end in less than a day.

The scorpion-shape machine, built by Toshiba Corp., entered the No. 2 reactor core Thursday and stopped 3 meters (10 feet) short of a grate that would have provided a view of where fuel residue is suspected to have gathered. Two previous robots aborted similar missions after one got stuck in a gap and another was abandoned after finding no fuel during six days of searching.

After spending most of the time since the 2011 disaster containing radiation and limiting ground water contamination, scientists still don’t have all the information they need for a cleanup that the government estimates will take four decades and cost ¥8 trillion. It is not yet known if the fuel melted into or through the containment vessel’s concrete floor, and determining the fuel’s radioactivity and location is crucial to inventing the technology needed to remove it.

“The road map for removing the fuel is going to be long, 2020 and beyond,” Jacopo Buongiorno, a professor of nuclear science and engineering at the Massachusetts Institute of Technology, said in an e-mail. “The re-solidified fuel is likely stuck to the vessel wall and vessel internal structures. So the debris have to be cut, scooped, put into a sealed and shielded container and then extracted from the containment vessel. All done by robots.”

To enter a primary containment vessel, which measures about 20 meters at its widest, more than 30 meters tall and is encased in meters of concrete, outside air pressure is increased to keep radiation from escaping and a sealed hole is opened that the robot passes through. Three reactors at the plant suffered meltdowns, and each poses different challenges and requires a customized approach for locating and removing the fuel, said Tatsuhiro Yamagishi, Tokyo Electric Power Co. Holdings Inc. spokesman.

The machines are built with specially hardened parts and minimal electronic circuitry so they can withstand radiation, if only for a few hours at a time. Thursday’s mission ended after the robot’s left roller-belt failed, according to Tepco. Even if it had returned, this robot, like all others so far designed to aid the search for the lost fuel, was expected to find its final resting place inside a reactor.

Hitachi Corp. in the next two months plans to send a machine into the No. 1 reactor core that scientists hope can transmit photos of the fuel and measure radiation levels.

The snake-like robot will lower a camera on a wire from a grate platform in the reactor to take photos and generate 3-D models of the bottom of the containment vessel. This will be the third time for Hitachi to send in a robot of this design.

While the company is hopeful this robot will find some of the fuel, it will likely be unable to find all of it, according to Satoshi Okada, a Hitachi engineer working on the project. The company is already planning the next robot voyage for sometime after April.

On Thursday, Toshiba’s scorpion-like robot entered the reactor and stopped short of making it onto the containment vessel’s grate. While Tepco decided not to retrieve it, the company views the attempt as progress.

“We got a very good hint as to where the fuel could be from this entire expedition,” Tepco official Yuichi Okamura said Thursday at a briefing in Tokyo. “I consider this a success, a big success.”

Tepco released images last month of a grate under the No. 2 reactor covered in black residue that is possibly the melted fuel — one of the strongest clues yet to its location. The company measured levels of around 650 sieverts per hour through the sound-noise in the video, the highest so far recorded in the Fukushima complex.

A short-term, whole-body dose of over 10 sieverts would cause immediate illness and subsequent death within a few weeks, according to the World Nuclear Association.

“Radiation levels near the fuel are lethal,” said MIT’s Buongiorno, who holds the university’s Tepco chair, a professorship based on an initial donation by the company 10 years ago. There are no formal affiliations or obligations for the faculty who receive the chair, he said.

Because the No. 2 unit is the only one of the three reactors that didn’t experience a hydrogen explosion, there was no release into the atmosphere and radiation levels inside the core are higher compared with the other two units, according to the utility.

Tepco has focused on removing spent fuel in the upper part of the reactor structure, which Toshiba aims to extract with a claw-like system. This fuel didn’t melt and is still in a pool that controls its temperature.

The spent fuel in No. 3 is scheduled for removal before the end of the decade. It was first of the three reactors to melt down. Toshiba is developing another robot to search for melted fuel and it is planned to enter sometime in the year ending March 2018.

The company has not yet announced the design or strategy. 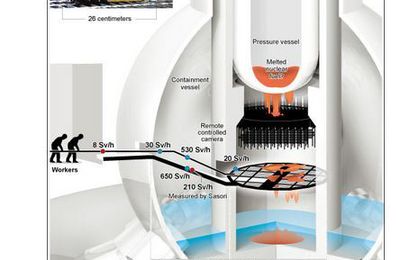 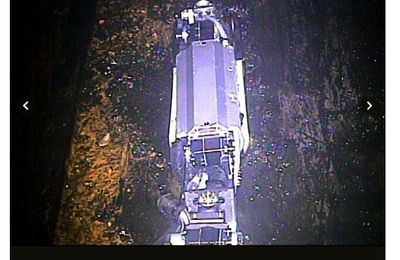 Radiation levels might be higher
« Article précédent No.2 robot abandoned Article suivant » Where IS the fuel?