Not so sure about icewall 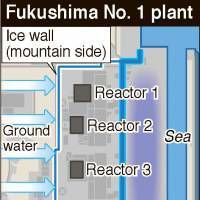 Tokyo Electric Power Holdings Inc. and the government bet big on an underground ice wall as a key measure to battle the tainted water issue at the crippled Fukushima No. 1 nuclear plant.

But whether the ¥35 billion gambit funded by the government is working to block the inflow of groundwater remains unclear even six months after the utility started freezing an area of underground soil.

Tepco said it needs more time to judge whether the system is working. But the Nuclear Regulation Authority, Japan’s nuclear watchdog, appears skeptical on the effectiveness of the 1.5-km-long wall that encircles reactor buildings 1 to 4, asking Tepco to deal with the issue but without counting on it.

So far Tepco has finished freezing the east side of the ice wall — albeit with delays caused by severe typhoon-driven rains — and 95 percent of the west side but has yet to get the NRA’s approval to freeze the 100 percent of it.

“It’s really unfortunate and I am very sorry” for not being able to provide an assessment of the ice wall, Naohiro Masuda, who heads Tepco’s decommissioning project, told a news conference Thursday.

Masuda said in August that Tepco would be able to provide an assessment of the effectiveness of the ice wall in September, and that the utility would have finished freezing the east side by then.

But Masuda said unexpected heavy rain during recent typhoons melted some parts of the structure.

Masuda said workers have since repaired the damage and finished freezing the east side 100 percent. But he declined to say when the assessment will be released.

The purpose of the ice wall is to block groundwater before it can enter the reactor buildings, which are located between nearby mountains and the ocean.

To do this, Tepco pumps groundwater that has flowed west to east toward five wells near the ocean, back into the reactors to cool them.

If the wall succeeds, the water being pumped from the ocean wells should reduce to about 70 tons each day, from hundreds of tons, according to Tepco. The daily level was between 600-1,200 tons in September, which Tepco attributed to heavy rains.

About 180 tons of groundwater a day seeps into the reactor buildings through cracks or holes and is mixed with contaminated water inside, causing the amount of tainted water at the plant to increase daily.

Currently, about 68,000 tons of tainted water is stored there but the risk remains that it could leak if another powerful quake hits near the facility.

For Tepco, the success of the ice wall is fundamental to achieve its next major goal of removing the contaminated water flooding the basement floors of the reactor buildings.

The utility plans to remove the water by 2020, but believes it can speed up the process by two years if the underground wall works.

The NRA, however, remains unconvinced.

“(Tepco) needs to come up with measures that do not rely on the ice wall and complete the removal of the tainted water from the building by 2020,” Toyoshi Fuketa, deputy NRA chairman, told Tepco officials at a panel meeting Wednesday.

During the meeting, Tepco expressed its intention to freeze the entire west side of the wall.

But Fuketa said, “That’s out of discussion,” since it was still unclear whether the east side was effectively blocking groundwater.

Among the NRA’s concerns is that completely blocking the groundwater on the west side might reduce the groundwater level below the tainted flooded water line in the reactor buildings, which would allow tainted water to leak out.

But as the wall appears to have done little to reduce the amount of groundwater pumped daily, the NRA ordered Tepco to come up with alternative measures.

The NRA has suggested that Tepco strengthen the pumping capability of wells around the reactor buildings to collect the groundwater before it can seep inside.

Tepco said at the Wednesday meeting that it will still be able to finish the removal of tainted water in the buildings by 2020 without the icewall. 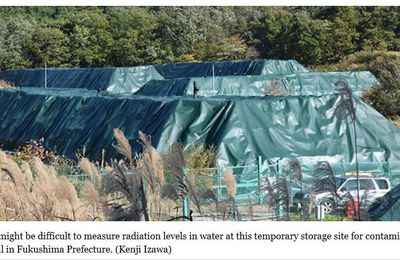