Before the Fukushima triple meltdown five years ago, there were 54 nuclear power reactors in Japan, providing 30 percent of Japan's electricity. Following the disastrous earthquake and tsunami of March 11 2011, most of those reactors continued to operate. Over the next year, however, all of them were shut down, one by one, for annual maintenance -- and remained shut down because the governors of the local prefectures responded to the wishes of the citizens by refusing to give the needed permission to restart them. For about three years, therefore, all 54 reactors have been shut down, and Japan has had to make do with additional energy imports and with the cooperation of businesses to reduce their electrical consumption by 15 percent. There was another 15 percent that was a surplus to electrical needs -- it was considered as a prudent backup electricity supply.

In April 2015 the government of Prime Minister Abe announced that it wants nuclear plants restarted so they can play an important role in meeting the country's base-load electrical needs. About 40 reactors in Japan's nuclear fleet are considered fit to restart under new international safety standards laid down after the Fukushima disaster. In recent months, two nuclear plants in Japan, each having two nuclear reactors, have been restarted. Now, however, a judge has ordered the shutdown of both reactors at the latest nuclear plant to be restarted, just two months ago, known as the Takahama NPP. This was in response to a lawsuit launched by citizens in a neighbouring prefecture who argued that they would be seriously affected by an accident at one of these plants.

Plans are well-advanced for a massive public rally in Tokyo on March 26 against the restart of any more nuclear reactors in Japan. The findings of a exhaustive report on the causes of the Fukushima disaster, commissioned by the Japanese legislature known as the Diet, were that the nuclear disaster was man-made, caused by collusion between the government, the nuclear industry, and the regulatory body. Public confidence in nuclear power technology has been shattered, and the damage seems irreparable.

TOKYO — A court in Japan ordered one of only two nuclear power plants operating in the country to shut down on Wednesday, citing insufficient safety measures put in place after meltdowns at a facility in Fukushima five years ago.

The plant, Takahama Nuclear Power Plant, had been back online for only two months after an extended freeze on atomic power in Japan in the aftermath of the March 2011 Fukushima disaster.

Japan’s government and its power companies have struggled to get the nuclear industry back on its feet. Despite new safety standards introduced in 2013, much of the public remains wary. Only a handful of the more than 40 operable reactors in the country have met the new rules, and lawsuits have made it difficult to restart them.

Prime Minister Shinzo Abe’s government sees a revival of nuclear power as critical to supporting economic growth and slowing an exodus of Japanese manufacturing to lower-cost countries. Electricity prices have risen by 20 percent or more since the Fukushima disaster because of increased imports of fossil fuels, though the recent drop in oil prices has taken some of the pressure off.

The court ruling on Wednesday added a new twist to the legal battles over nuclear power.

Judges have enjoined idled plants from being put back into service, but the judgment against Takahama was the first in which a facility that had successfully been restarted was ordered to shut down. Takahama’s owner, Kansai Electric Power Company, brought one reactor at the facility back online in January and another last month.

The court, which is in Otsu, Shiga Prefecture, said neither restart should have happened. It was responding to a request for an injunction filed by residents, who said the plant’s owner had underestimated the size of earthquakes that could strike the plant and had not made adequately detailed plans to evacuate people living nearby in case of an accident.

Government safety regulators say Takahama meets Japan’s new safety guidelines, which address such issues. But the court ruled for the plaintiffs, saying there were “points of concern in accident prevention, emergency response plans and the formulation of earthquake models.”

Kansai Electric said it would appeal. It has won previous appeals against injunctions issued against its plants, including Takahama. The company overcame a separate lawsuit to bring the plant online in January.

Takahama is in Fukui Prefecture, a stronghold for the atomic power industry that is home to 13 commercial reactors and that has earned the nickname Genpatsu Ginza, or Nuclear Alley. But the latest lawsuit was filed by residents of the neighboring Shiga Prefecture, who said they would be affected by radiation from a serious accident at Takahama.

Radiation releases from the plant in Fukushima affected a wide swath of northeastern Japan. More than 100,000 residents were evacuated, and many are still unable or unwilling to return. 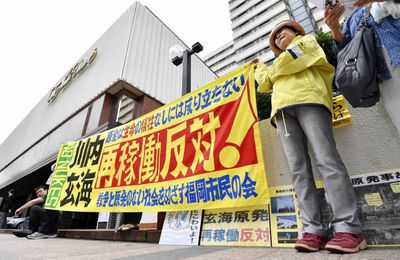 Shareholders say no to nukes

Not safe to restart

Residents file request to revoke restart permit (Sendai)
« Article précédent So pure it could easily be turned into bombs Article suivant » Deregulation: What's in it for people?

Pierre, you're still here! Thank you for doing what you're doing.