Shareholders of the nation's nine regional utilities with nuclear power plants rejected calls for a nuclear-free Japan at their annual meetings on June 25, while management reaffirmed plans to restart the reactors as soon as possible.

This year, as in 2014, some shareholders demanded the companies abolish their nuclear facilities, but all those proposals were dismissed.

Nuclear plant operators across Japan are seeking to restart their reactors, which have been taken off-line for safety inspections due to the Fukushima nuclear crisis triggered by the March 2011 Great East Japan Earthquake and tsunami.

The administration of Prime Minister Shinzo Abe has insisted that Japan needs to maintain its dependence on nuclear power for a portion of the nation's energy needs.

At the June 25 shareholders' meeting of Tokyo Electric Power Co., operator of the crippled Fukushima No. 1 nuclear power plant, a group of 400 shareholders, named the Nuclear Phase-out TEPCO Shareholders' Movement, called on the utility to include “a plan to withdraw from nuclear power” in its articles of incorporation.

“TEPCO failed to prevent the nuclear accident,” said Katsutaka Idogawa, a member of the group who was serving as the mayor of Futaba in Fukushima Prefecture when the nuclear disaster unfurled. “It should give up operating reactors because they are not safe.”

Even after his allotted three minutes for speaking ran out, Idogawa continued, “When can we return to our homes? We cannot wait any longer.”

Meanwhile, the Osaka and Kyoto municipal governments, which hold shares in Kansai Electric Power Co., proposed that the utility abolish its reactors.

“The Japanese people hope to realize a society independent from nuclear power,” Kyoto Mayor Daisaku Kadokawa said at the meeting.

But the proposal was voted down by shareholders.

Osaka Mayor Toru Hashimoto was not in attendance, although he delivered a speech that lasted nearly 10 minutes at last year’s general meeting.

But nine utilities including Tokyo Electric Power Co., the operator of the crippled Fukushima Daiichi complex, voted down all antinuclear proposals at their general shareholders' meetings, with company officials expressing eagerness to reactivate nuclear plants as soon as possible to improve their business conditions hurt by the halt of all nuclear reactors in the country.

The shareholders' meetings were held at a time when a nuclear plant in southwestern Japan is expected to be the first to go back online, possibly this summer, under tighter post-Fukushima safety requirements.

At TEPCO's meeting, Katsutaka Idogawa, former mayor of Futaba town in Fukushima Prefecture -- currently uninhabitable due to radiation contamination -- said pulling out of nuclear power is "the only way for the company to survive."

TEPCO has "forced people who were living peacefully into a situation like hell...I propose TEPCO break away from nuclear power," he said.

But TEPCO President Naomi Hirose told the shareholders that he believes nuclear power generation is "very important" for a stable supply of electricity and for lower prices.

Some TEPCO shareholders also called for putting a priority on promoting renewable energy such as solar and wind, but the company opposed the motion.

The Japanese utilities' eagerness to revive nuclear power is in line with Prime Minister Shinzo Abe's plan to reactivate reactors that have met the new safety regulations compiled after the Fukushima accident.

In stark contrast, the majority of the public remains opposed to nuclear power following the Fukushima triple-reactor meltdowns.

Some shareholders of Kyushu Electric Power Co., which hopes to restart its Sendai nuclear plant in August, proposed that the company president be dismissed, saying his stance of continuing the use of nuclear power has caused its earnings to deteriorate. The motion was later voted down.

President Michiaki Uriu told the meeting that the utility "aims to restart nuclear reactors as soon as possible on the premise that securing safety is the priority."

The city of Osaka, the largest stockholder of Kansai Electric Power Co., proposed a business reform plan toward ending reliance on nuclear power generation, but it was also turned down.

Kansai Electric President Makoto Yagi pledged to do his "utmost to restart nuclear plants whose safety have been confirmed," including its Takahama reactors in western Japan that have cleared the regulator's safety screening.

The Japanese government plans to make nuclear energy account for 20 percent to 22 percent of the country's total electricity supply in 2030, compared with around 30 percent before the world's worst nuclear accident since the 1986 Chernobyl disaster. 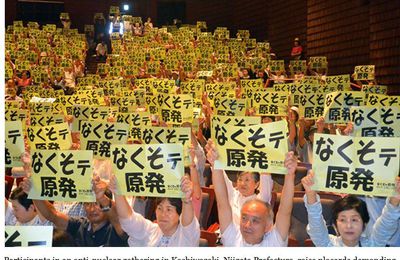