What about nursing homes in case of emergency?

SENDAI -- Nursing home users shouldn't necessarily be evacuated right after a nuclear disaster, the head of facility near the Fukushima No. 1 Nuclear Power Plant told participants at a U.N. conference here on March 17.

"There is an option to not evacuate, but to hunker down instead," Ken Takagi, 49, the head of a nursing home in the Fukushima Prefecture town of Naraha told participants in a discussion forum at the U.N. World Conference on Disaster Risk Reduction.

Operations of Takagi's nursing home were suspended as a result of the nuclear disaster. He says that some of the residents he accompanied as they evacuated from location to location fell ill.

Early on the morning of March 12, 2011, a day after the Great East Japan Earthquake that triggered the Fukushima nuclear crisis, Takagi's nursing home was notified by the town government that the town was being evacuated. Together with eight employees and 11 facility users who hadn't been able to return to their homes the previous night, Takagi evacuated. The group piled into four vehicles and left the facility.

Their first destination was an elementary school gymnasium in Iwaki, Fukushima Prefecture. The inside was cold because the doors had been left open. Some of the nursing home users suffered from delusion, acting as if they were back in their own homes.

Thinking the situation was untenable, Takagi had the group leave on March 13 and enter a nursing home in the city, but due to food shortages, the group had to leave again on the morning of March 15. In the early morning hours of March 16, the group arrived at a facility in Chiba Prefecture that a friend of Takagi had managed to arrange for them. When Takagi weighed himself then, he found he had lost six kilograms.

Since then, Takagi has fretted over whether he made the right decisions. The mere act of putting bedridden and ailing elderly people into a vehicle can be dangerous.

Another nursing home, "Iitate Home," in Iitate, Fukushima Prefecture, did not evacuate. According to Takagi, nursing homes that moved their users from location to location tended to see higher death rates among users the year after the disaster. Iitate Home's death rate, however, was almost the same as it had been before the disaster. Takagi recommends that nursing homes store enough food, water and fuel to last around a week in an emergency.

Almost all of the town of Naraha lies within a 20-kilometer radius of the Fukushima plant, an area preparing for the lifting of evacuation orders. Residents are allowed to enter the area and stay during the daytime, but staying overnight is forbidden in principle.

"The radiation at Iitate Home was 0.2 to 0.3 microsieverts per hour at around the time of the disaster," Takagi says. "For a disaster of the scale (of the Fukushima disaster), I think the best way to protect (facility users') lives is to block off exposure from radiation outside the facility and keep the users there until a safe evacuation route is secured, then move them quickly."

Takagi encouraged participants to come and see people's positive outlook in Fukushima Prefecture. He feels that his acquaintances have drifted away from the prefecture.

"Please come to Fukushima to learn our lessons," he said to the forum discussion audience. 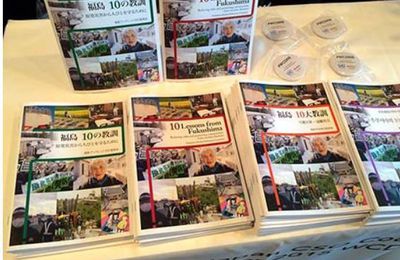 What about the Fukushima disaster, Mr.Abe?
« Article précédent Between 2 and 6 tons of contaminated waste for a (small) reactor Article suivant » But what is Gov't s energy policy?