Meltdown at No.1 confirmed

In a very recent e-mail about the Muon Scan at Fukushima showing the Complete Meltdown of Unit 1, I incorrectly stated that "workers have only now finished building the largest mobile structure every constructed -- an enormous containment shell that will slide on concrete rails to fit tightly over the damaged Chernobyl reactor".

In fact the construction is not yet finished, but it was expected to be finished and fitted over the Chernobyl reactor in the summer of 2015. Apparently, according to World Energy News, that target date has now been pushed forward to the end of 2017. Sorry for the error.
The enormous and highly sophisticated steel structure is called the "New Safe Confinement".  It stands 110m high, and it is 250m wide and 150m long, weighing in at 30,000 tonnes.  It is currently being assembled 600m away from the damaged reactor.  This allows the workers to work for 40 hours a week without exceeding the radiation exposure limits for atomic workers.  Once it is finished the entire massive structure will be "slid" along concrete tracks to fit over the old crumbling sarcophagus.
It is called a "Confinement" structure rather than a "Containment" structure because it is not designed to hold in hot pressurized gases as reactor containments are required to do, but simply to confine radioactive solids and dusts and vapours that may be stirred up during an inadvertent collapse of the existing sarcophagus or of the damaged reactor building itself, or by the radioactive demolition work that will be taking place inside the New Safe Confinement structure.
See http://tinyurl.com/owz9bwo

It has long been known that three of the reactor cores at the Fukushima Dai-ichi nuclear station suffered meltdowns. In Units 1, 2 and 3, the nuclear fuel inside the reactor core, -- made mostly of uranium and plutonium oxides, and the fuel cladding, made of zirconium metal -- over-heated and melted at a temperature of 5000 degrees F (2800 degrees C).

Muon tomography is a technique developed in 2003 for obtaining a three-dimensional image of the internal distribution of very heavy elements (like uranium and plutonium) inside several thick-walled and otherwise impenetrable containers.  This technique is well-suited to get a picture of where the fuel in a melted-down nuclear reactor might have gone after a major meltdown accident like the Fukushima disaster.

Muon tomography is a slow process requiring months of effort, harnessing extremely the energetic muons that are produced when cosmic radiation from outer space collides with air molecules in the Earth's atmosphere, and directing those muons through the core of the reactor, painstakingly building up a picture, in sections, of where the fuel is.  Muons are much more penetrating than x-rays, and they are particularly good at picking out the heaviest elements while ignoring the lighter elements found (for example) in the walls of the containment structures.

Well the results are in for Unit 1, and the answer is -- there is no fuel in the core at all.  The reactor vessel is devoid of fuel. It has all melted or dripped through the bottom of the reactor vessel, and it is still unknown where it has all gone to.  We are talking about 150 tonnes of very heavy, intensely radioactive material, that has melted like candle wax and simply dripped away.... Time will tell whether the same is true for Units 2 and 3.

At Chernobyl, where the core of the reactor melted right down into the ground almost 30 years ago, workers have only now finished building the largest mobile structure every constructed -- an enormous containment shell that will slide on concrete rails to fit tightly over the damaged Chernobyl reactor so that now, three decades after the accident, workers in Ukraine can begin the long and difficult job of dismantling the reactor building and recovering and packaging the many tonnes of highly radioactive corium from its underground  cavity.

The Tokyo Electric Power Company (TEPCO) has announced that its muon tomography scanning efforts at Fukushima have borne fruit, and confirmed that nuclear plant’s Reactor #1 suffered a complete meltdown following the earthquake and tsunami that struck Japan on March 11, 2011.

Thus far, the muon tomography scans haven’t revealed anything that scientists and cleanup crews working at Fukushima didn’t expect. But that doesn’t make the work any less important. The only way to safely clean the site and dispose of the highly radioactive slag that’s now believed to fill the bottom of the Pressure Containment Vessel, or PCV, is to first map out what melted within the core and where the flow went afterwards. 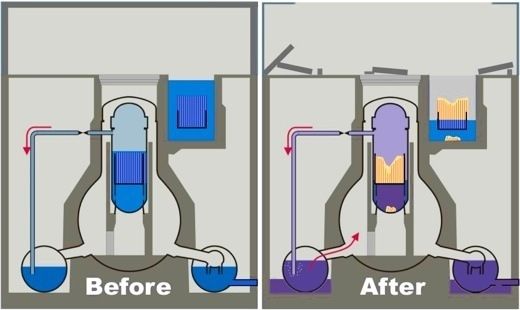 Fukushima’s Unit 1 reactor before and after

Muon tomography was used to scan the damaged reactor because muons can penetrate materials that absorb other imaging wavelengths, like X-rays, in their tracks. Muons have also been used to image buildings and structures like the Great Pyramid in a search for secret chambers, and to examine volcano magma chambers for evidence of imminent eruptions. Superman’s X-ray vision is actually more like muon vision, except for that whole can’t-see-through-lead restriction. 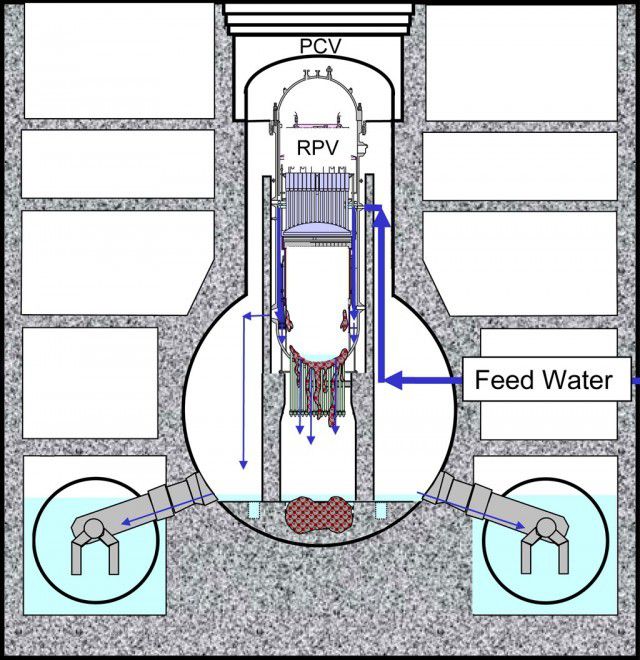 What today’s findings confirm is that nuclear fuel rods inside the reactor underwent complete meltdown. The image below shows a before-and-after shot of what a reactor looks like in normal operation and then after partial meltdown has begun. Note that the water level inside the Reactor Pressure Vessel (RPV) has dropped and the rods are melting as a result. This began to happen in Reactor #1 within hours of the tsunami. Subsequent analysis over the past few years has confirmed that there seemed to be very little nuclear fuel remaining inside the RPV. Maybe.

Did Fukushima suffer a melt-through at Reactor #1?

After first denying that a melt-through had occurred, TEPCO later changed its tune and said that it most likely had, at least at Reactor #1. This means that molten corium flowed completely through the RPV and into the PCV before being stopped by the several meters of concrete within the base. This wasn’t an entirely settled question, however, since radiation measurements and water testing have not found the isotope levels that would be expected if the majority of the corium were in direct contact with the concrete layer beneath the PCV. One alternate theory is that the seawater that was pumped into Reactor #1 after the disaster may have cooled the corium before it finished burning through the reactor pressure vessel.

Scans like the above appear to support TEPCO’s position that melt-through occurred, but the organization’s trustworthiness and understanding of the conditions at Fukushima Daiichi have been called into question multiple times since the accident. Conditions at the facility have been repeatedly misrepresented (or were simply inaccurate), and the company ignored multiple safety reports and warnings that the plant was vulnerable to a tsunami in the first place.

What happened to the fuel rods is more than an academic question. Reactor #1 contained an estimated 125 tons of uranium dioxide, zirconium, steel, boron carbide, and inconel, and finding out where the corium flowed is critical. TEPCO has announced that unlike Chernobyl, which is slowly being sealed inside a layer of concrete, they intend to scrap [dismantle] reactor Daiichi 1, 2, 3, and 4. This makes it particularly critical to understand where the corium is in order to facilitate its eventual removal. The scrapping process [final decommissioning] is a long one — it’ll take an estimated 30-40 years to finish, and the company won’t start removing [molten] reactor fuel until ten years after the accident.

TEPCO resumes removal of No.1 cover