No dark side to German "Energiewende"

The myth of the dark side of Germany’s Energiewende

By Conrad Kunze and Paul Lehmann on 18 February 2015

Critics of renewable energy have mocked the Energiewende, claiming that it has led to an increase in coal power and related CO2 emissions in Germany. But Conrad Kunze and Paul Lehmann of the Helmholtz Centre for Environmental Research – UFZ show that this is a myth. German coal generation and CO2 emissions rose not because of but in spite of the Energiewende. They would have been even higher if Germany had not phased out its nuclear power and embarked on its remarkable renewable energy path. “There is no dark side to the Energiewende”.

The Energiewende has come in for a good share of mockery in the international media, especially in the Anglo-Saxon and French press. It was widely reported that CO2 emissions in Germany, famous for its anti-nuclear stance and multibillion-euro renewable energy programme, increased in 2013 (and 2012). True enough, in 2013 German emissions – although still well below the levels of 1990 and 2000 – did rise by 1.5% (see Figure 1). And the reason for this was the growth in Germany’s coal-fired power generation (see Figure 2). 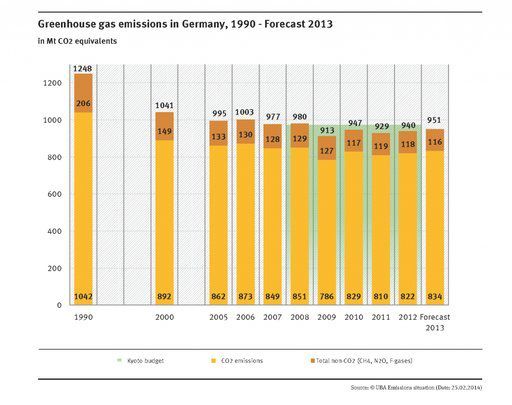 Most commentators swiftly linked this trend – increases in CO2emissions and coal-fired power generation – to Germany’s energy transition. National Geographic wrote in February 2014: “Some blame the return of coal on the imminent end of Germany’s nuclear power industry”.[1] In the same month, the New York Times agreed: “But Germany’s sudden hunger for coal has emerged as the dirty side of Ms. Merkel’s ambitions to shut down the country’s nuclear power plants by 2022 and eventually move Germans mostly to renewable energy.”[2]And the Guardian repeated the story in August, embellishing the claim by specifically making a nuclear-lignite connection: “Lignite (…) consumption in Europe has remained stable since the late 1990s, but grew slightly over the past few years on the back of high gas prices and the scaling back of nuclear power in Germany.”[3]

Is this narrative true? Has the Energiewende really caused a coal binge in Germany?

Source: Based on data from AG Energiebilanzen e.V., 2014

The narrative of Germany’s dirty Energiewende rests on the idea that renewables could not live up to their promise to fill the gap of retiring nuclear reactors. Consequently, that gap needed to be closed by power generation from coal.

But if we look at the figures we get quite a different picture. The yellow line in Figure 2 above depicts how the amount of electricity from nuclear declined from 2000 to 2014. Due to the decommissioning of old plants, nuclear power had been declining steadily. When the German government decided on the phase-out, in 2011, some nuclear power stations were shut down immediately and the output went down more quickly. Afterwards, the steady decline continued once more.

The green line shows the steady rise of renewable energy in the same period. In 2011, more electric energy was provided from renewable sources than from all nuclear facilities. In 2014, renewables achieved a share of approximately 29% in total electricity generation. So renewables have substituted the falling nuclear production in terms of total annual power generation and are very likely to continue doing so until 2022 when the last nuclear plant will be shut down.

Certainly, this observation needs to be interpreted with care. Due to the intermittency of wind and solar energies, power generation from renewables does not always correspond to that of nuclear. Even if renewables can compensate for the reduction in nuclear power generation on an annual basis, there may be shortages throughout the year when the wind is not blowing and the sun is not shining. Such gaps need to be closed by power generation from other sources.

But we know that coal generation did increase in 2012 and 2013. Why was that if not to make up for renewable shortfalls? There is in fact a ready explanation. As renewables and coal increased, and nuclear dropped, overall power generation in Germany increased from 613 to 633 terrawatt-hours (TWh) from 2011 to 2013. Did Germans use that much more energy then? No! In fact, domestic power consumption declined during the same period!

Figure 3, which shows power exports and imports, throws light on the question. The blue line in the graph depicts the amount of imported electricity in TWh. From 2000 to 2007 imports stayed level, despite a brief increase. The red line stands for the amount of exported energy. In 2002 exports started to rise steeply and stayed well above the blue line. In other words, since 2002 Germany has been an electricity exporting country. It also imports, but exports exceed imports.

There is a drop in power exports in 2011, the year in which the decision to phase out nuclear was taken. But even with that reduced production capacity in 2011, Germany still exported more than 50 TWh. The country has never become an electricity importer again, despite the nuclear phase-out.

More importantly, since 2012, exports have been thriving! We may deduce, then, that the German coal binge is related to the increase in overall power generation and exports, not to the Energiewende as such. 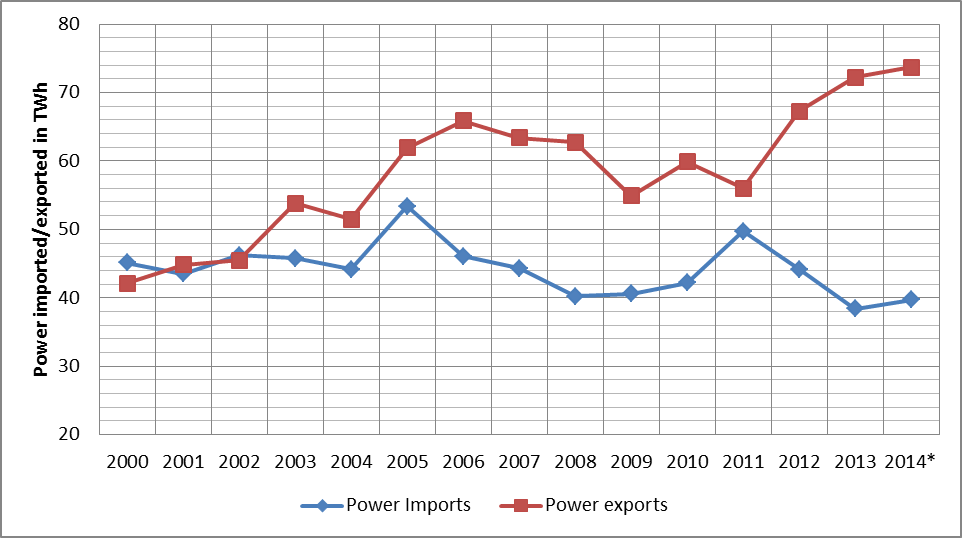 Figure 3: Power imported to and exported from Germany (in terrawatt-hours, 2014 data partly estimated)

Source: Based on data from AG Energiebilanzen e.V., 2014

The coal binge is global, not German

So why has coal generation been thriving? The actual story has got little to do with the German Energiewende, and a lot with international markets. In fact, the cost of generating power from coal has declined over the past years. World market coal prices have dropped significantly by more than 30% since 2011 (see Figure 4). As the International Energy Agency points out in its recent Medium-Term Coal Market Report, prices have been driven down by a large oversupply of coal, partly as a result of the shale gas boom in the United States, but also thanks to increasing production capacities in Asia.

Both effects – the drop in coal and CO2 allowance prices – have made coal an extremely profitable fuel for power generation. Notably, both developments happened in 2011, the year of the nuclear phase-out.

Given Germany’s large stock of existing coal-fired power plants, it is no surprise that coal-fired power generation and exports have increased significantly since then. It is thus obvious that the German coal binge has been primarily driven by the developments in international fuel and carbon markets – and hardly, if at all, by Germany’s energy transition. Most likely, it would have occurred in the same way if Germany had not phased out nuclear and promoted renewables. 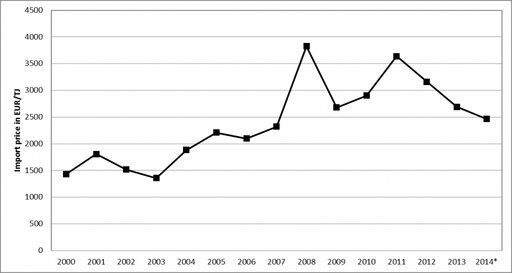 Promoting the Energiewende by phasing out coal

Many observers simply don’t believe that it’s possible for a modern industrial nation to phase out both nuclear and fossil power plants, as the Energiewende is aiming to do. In that sense the Energiewende has become a great test case for the possibility of a post-fossil and post-nuclear energy economy. Is it passing that test?

If the German Energiewende rests on these two pillars – getting rid of the old nuclear-fossil power plants and setting up new, renewable capacity – the second one is certainly holding up. Renewables rose to an all-time high of 27.7% of electricity production in October 2014 and for the first time beat lignite (26.2%) as the main source for electricity generation.[4]

The other pillar, however, is only half-standing. Nuclear plants are gradually shutting down, but what is missing is a mechanism to retire the coal industry. The most effective and efficient means to do so would be the tightening of the European Emissions Trading Scheme (ETS), e.g. by reducing the overall emissions cap or by implementing a price floor. Admittedly, this option may be limited due to political objections from some Member States, notably Poland. Additional measures, such as a politically mandated phase-out of coal were already considered and rejected in the political discourse.

Economy Minister Sigmar Gabriel, responsible for the Energiewende, still emphasises the necessity of coal as a bridging technology, to prevent what he has called a “de-industrialisation of Germany”. But the energy industry itself seems to go the other way. In 2014, coal giant RWE was still in financial trouble, the main lignite producer Vattenfall announced its withdrawal from lignite as early as 2015 and Eon has announced its divestment from all coal and nuclear facilities. It is now up to German (and European) policymakers to fully internalise environmental costs in power prices and advance the phasing out of coal.

A temporary coal binge despite the Energiewende

The French-German TV station Arte commented on the expansion of one open cast lignite mine as “the dark side of the Energiewende”.[5] But this is fundamentally wrong: coal generation and related CO2 emissions have risen despite of, not because of, the Energiewende – and presumably would have been even higher without the promotion of renewables.

Recent figures support this argument: Germany’s coal-fired power generation and CO2 emissions from power generation have started to decline again in 2014, even if the seasonal effect of the relatively warm winter is excluded (AG Energiebilanzen 2014).

Moreover, it is important to emphasize that the Energiewende is not only about climate change mitigation. It also pursues the overall objective of making power generation more sustainable. It is meant to address quite diverse issues next to climate change, such as nuclear hazards, local environmental problems, fuel import dependency and even a democratisation of the energy economy (Kunze/Becker 2014, Gawel et al. 2014). Consequently, an assessment of the Energiewendemust not be based on CO2 reduction only, but on all relevant societal benefits.

In Germany it took a long time for renewable energy not to be portrayed anymore as a niche activity, unable to provide large-scale power. In international debates this notion still seems commonplace. Mistakenly, as we have tried show.

Concluding that the Energiewende has taken the right direction is not to say that it has overcome all major challenges. Important issues still need to be solved, such as safeguarding security of supply with high shares of volatile renewables or mitigating social and ecological conflicts associated with renewables. These are the real challenges that should be spotlighted when discussing the future of the German energy transition, which continues to unfold despite what seems to have been a coal intermezzo.

Izumida will not run in gubernatorial election