Nearly 4 years have passed since the nuclear accident at Japan's Fukushima Daiichi plant. But even as work proceeds on decommissioning the reactors, experts are still trying to grasp all the details of the disaster. They have made new discoveries about the radioactive substances released from the reactors. In this installment of Nuclear Watch, we tell you what they've found.

On March 13th, 2011, a US aircraft carrier deployed off northeastern Japan detected an increase in the level of radiation in the atmosphere. The crew kept a running record of the data.

NHK created this chart with help from a researcher who's been analyzing the information.

Up until now, people looking into the accident had focused on the 4 days immediately after the disaster. That's because they thought the bulk of radioactive substances was released from the plant during that period. 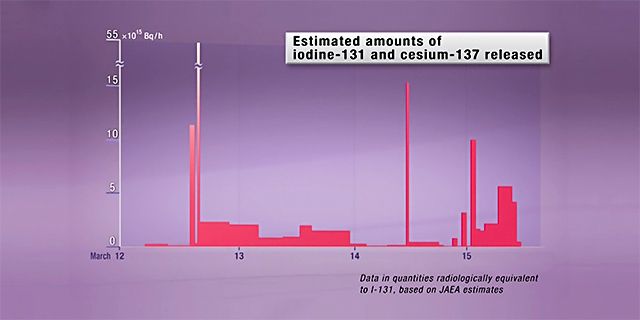 However, the data analyzed by the researchers suggest something different. Only a quarter of the radioactive substances drifted away from the plant during the first 4 days. The remaining 75 percent spread over the next 2 weeks. 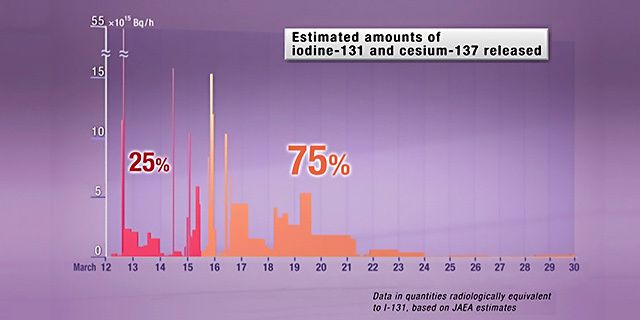 An analysis reveals why this happened. When the disaster hit, the nuclear plant lost its external power. That made electric pumps that inject water into the reactors useless.

So workers used fire engines to spray water into the reactors in an effort to keep them from melting down.

The fire engines pumped out 30,000 liters of water every hour. But an in-house investigation by the plant's operator shows only about 1,000 liters per hour reached the targets.

Nuclear fuel is covered with a metal called zirconium. We heated the metal to a temperature of 1,200 degrees Celsius, the estimated temperature inside the reactors when the accident happened. We then poured traces of vapor onto the metal to simulate water from the fire engines.

Instead of dropping, the temperature of the metal quickly began to climb. In 2 minutes, it surged by 78 degrees. Experts suspect this is why large amounts of radioactive substances escaped over an extended time.

"Fuel keeps melting slowly, as zirconium generates a relatively large amount of heat," explains Masanori Naitoh, Director of the Institute of Applied Energy. "The metal remained hot for some time. This means radioactive materials will be released for a longer time."

The experiment showed that water that was meant to prevent the meltdowns may have actually sustained them. Naitoh says the result shows that radioactive substances kept leaking out and spreading into the atmosphere.

NHK WORLD's Kenichiro Okamoto has been following the story, and tells us what he's learned.

Why wasn't the fallout discovered until now?

Several independent panels investigated the accident. Some were appointed by the government... others by the Diet, or private groups.

The members tried to figure out why no one was able to control the situation. They focused on the 4 to 5 days after the disaster, when TEPCO failed to prevent the reactors from melting down.

Are the investigations ongoing?

And no one has been able to get close enough to determine what's happening inside. And it's possible there may still be more data to analyze about radioactive substances released from the plant.

This explains why experts believe it will take several decades to get a complete picture of what happened. In the meantime, everyone needs to keep in mind that no nuclear plant is perfectly safe.

And members of the media need to keep watching the situation, and report on future developments as they happen.

"There is no return to normal after this nuclear catastrophe"

In Chiba radioactive is no longer radioactive...
« Article précédent Preparing for mass return (to Nahara) Article suivant » "Gimmicks" for an "unrealistic reliance" on nukes