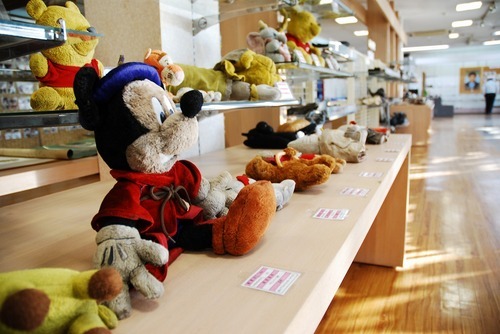 Stuffed animals that were found during the removal of debris are on display at a store in Namie, Fukushima Prefecture, on Dec. 2, 2014. (Mainichi)

FUKUSHIMA -- When Prime Minister Shinzo Abe and Democratic Party of Japan (DPJ) leader Banri Kaieda made their first campaign speeches for the upcoming general election in the Fukushima Prefecture cities of Soma and Iwaki, respectively, on Dec. 2, I was in Soma to listen to Abe's speech. Abe then headed north to Miyagi to make another speech, by way of Route 6. I drove down the same route the opposite way, to the south to see the current situation of the Fukushima nuclear disaster.

Alongside Route 6 connecting Soma and Iwaki are the vast areas stricken by the Fukushima No. 1 Nuclear Power Plant crisis. Abe, who heads the ruling Liberal Democratic Party (LDP), said in his campaign speech in Soma, "Without Fukushima's reconstruction, there will be no recovery for Japan." Kaieda reportedly told the audience, "When it comes to recovery, there should be no distinction between the ruling and opposition parties." If they are talking about Fukushima's recovery as politicians, why don't they go and see the realities of the disaster areas for themselves? This is why I decided to travel down the route to the south.

Fortunately, Route 6 was opened to traffic in September -- for the first time in 3 1/2 years since the onset of the nuclear catastrophe. 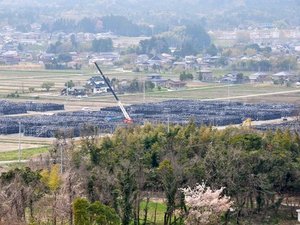 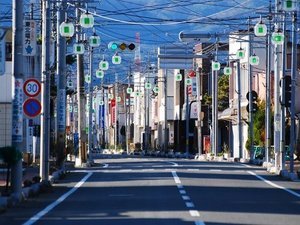 A street in the Odaka district of Minamisoma, Fukushima Prefecture, is pictured on Dec. 2, 2014. Although evacuation orders were lifted, the area is void of people in the daytime except for vehicles engaged in reconstruction work. (Mainichi)

My first destination was the Fukushima Prefecture city of Minamisoma -- where I was stationed at the time of the 2011 Great East Japan Earthquake. After witnessing the first tsunami wave, I managed to flee to an inland area. However, a friend of mine -- a reporter with a local newspaper -- perished in the tsunami.

Driving past the city office, which I used to visit for news gathering, I entered the southern part of Minamisoma -- still barred from habitation. Ostensibly, there were no visible scars from the quake disaster along the shopping streets, with the traffic lights signaling normally. But it felt spooky, as if all residents except me had been annihilated.

The next stop was the town of Namie. I dropped in at a store whose curtain read, "Memorabilia on display." Inside the establishment the size of a small supermarket, there were some 400 items that apparently belonged to residents here, including cameras, school bags and stuffed animals.

"It's been almost four years since the disaster, but we find one item after another," said store tender Noboru Kawaguchi, 65. The display space was launched in July by a Tokyo-based construction company undertaking removal of debris in the area. "We would like to return as many items as possible to their owners," company officials thought.

Kawaguchi, a former employee of the Namie Town Office, currently works for the construction company. He washes each item by hand and then measures their radiation doses.

Many of the memorabilia are stuffed animals that have turned a little brownish with mud. 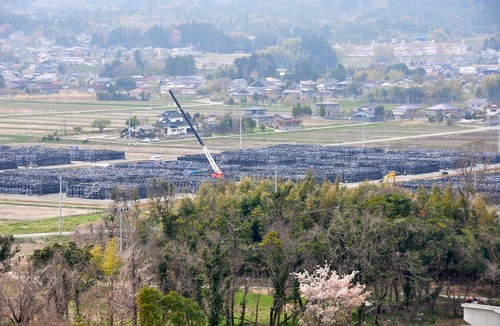 Black bags containing radioactive waste generated from decontamination work are piled up in rice paddies in Naraha, Fukushima Prefecture, in this picture taken on April 22, 2014. (Mainichi)

"These kinds of things can be identified only by their owners, who are children. Because parents are afraid of radiation exposure and are reluctant to take children here, these items are to remain here forever," he said.

The next town I visited was Futaba. "The difficult-to-return zone starts here," read a sign. The approximately 14-kilometer stretch from Futaba to Tomioka, a town whose radiation levels remain high, had long been closed to traffic. When the national government lifted the traffic regulations in September, it required drivers not to open car windows nor stop their cars along the stretch. Every side road was blocked with fences, and security guards wearing gas masks were standing at the entrance of roads used by construction vehicles. After driving a while, I saw the emission stacks of the stricken Fukushima No. 1 Nuclear Power Plant on the left.

Further down the route, I saw a sign for "Futaba Bara-en" rose garden. It was one of the most distinguished rose gardens in the Tohoku region, thanks to the efforts by garden owner Katsuhide Okada, his father and sons over nearly half a century. Prior to the 2011 disaster, I used to often write about the garden, where some 50 varieties of wild roses and some 120 types of old roses were grown -- rare species originating in the West.

Okada, 70, is now evacuated to Tsukuba, Ibaraki Prefecture. "The rose garden is a complete mess," he said in a dismal voice when I called him. "I want to return to my town and start over, but I wonder when we'll be allowed to go back. My sons say they want to start over in a new place," he said.

My next stop was the town of Naraha. The pastoral landscape this town used to boast is now nowhere in sight. Instead, countless numbers of flexible container bags holding radioactive soil generated from decontamination work are left in the open. At first sight, one might feel as if they wandered into a set for a sci-fi movie that depicts the shattered future.

As I drove down the route toward Iwaki, the words of Kawaguchi in Namie came up to my mind: "We have become used to radiation and container bags. Recovery will only begin when all of them are removed."

He also said, "I wanted Abe and Kaieda to drop by here, since they came all the way up to Fukushima." (By Keisaku Jinbo, Tokyo City News Department)