Fishermen in Fukushima are feeling the effects of the process of decommissioning the Fukushima Daiichi Nuclear Power Plant. They've been forced to change the way they work. And there are still restrictions on what they can catch. In this edition of "Nuclear Watch," NHK WORLD's Daisuke Kamikubo looks at how fishermen are trying to rebuild their industry.

The port of Onahama in Iwaki City is 50 kilometers south of the Fukushima plant. Fish are brought to the port four times a week. Fishermen call it test fishing.

Right after the fish arrive, they're screened for radioactive cesium. At least one per species is tested from each section of the fishing grounds.

"We have a rocky road ahead. But we will display the spirit of fishermen."
Fisherman

Fish that are confirmed safe can be shipped to consumers throughout Japan. Following the disaster, government officials established the world's strictest standards for radiation exposure for fish.

Right after the accident, 53% of fish caught in Fukushima were above the government ceiling. The number has gradually declined to 0.6%. 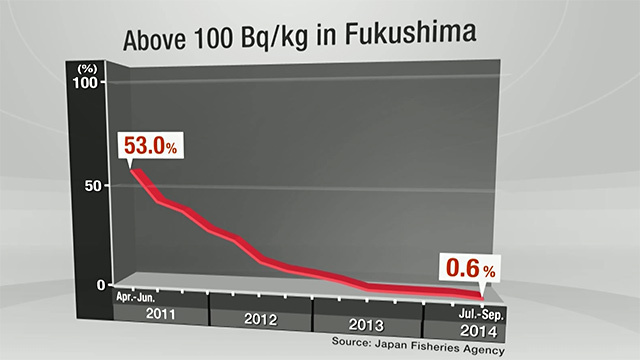 All fishing in the area was halted after the accident. 15 months later, fishing for just 3 species resumed, 50 kilometers out to sea north of Fukushima.
The area has been gradually expanded. Now, fishing is allowed in almost all waters except those very close to the plant. Fishermen now catch 52 species, about one-fourth of what they could before the accident.

"We just have to go step by step. We have to go beyond making loud claims about the safety of fish from Fukushima. We should continue testing fish and prove they're safe, so consumers will eat them."
Tetsu Nozaki / Chairman, Fukushima fisheries federation

But fishermen have yet to resume full-scale operations. They're not allowed to catch some species including flounder, which was the main source of revenue for Fukushima fishermen. The total volume of the catch is still 1.5 percent of what it was before the disaster. Fishermen say test fishing is necessary to rebuild the industry.

"Fishermen want to be fully back in business. But they face yet another hardship...a planned release of contaminated water from Fukushima Daiichi. Plant operator TEPCO says there is no problem as radioactive substances have been removed from that water. But fishermen are not so sure."
Daisuke Kamikubo / Onahama, Fukushima

In August, TEPCO officials said they might discharge groundwater that had accumulated in wells dug around the plant's reactor buildings. They say the groundwater is contaminated, but will be processed before it's released into the sea.

And over 500,000 tons of radioactive water is stored in tanks. The operator says it will continue storing the water there. Local fishermen say they will never allow TEPCO to discharge the water into the sea.

But they say they are not opposed to all of TEPCO's plans.

" We fishermen need to work hand in hand on decommissioning Fukushima Daiichi. We can't run away from the accident. If we wish to catch fish off Fukushima and sell them, we need consumers to know the fish are safe to eat."
Tetsu Nozaki / Chairman, Fukushima fisheries federation

TEPCO executives say the decommissioning will take up to 40 years. Fishermen are closely watching how the work proceeds.